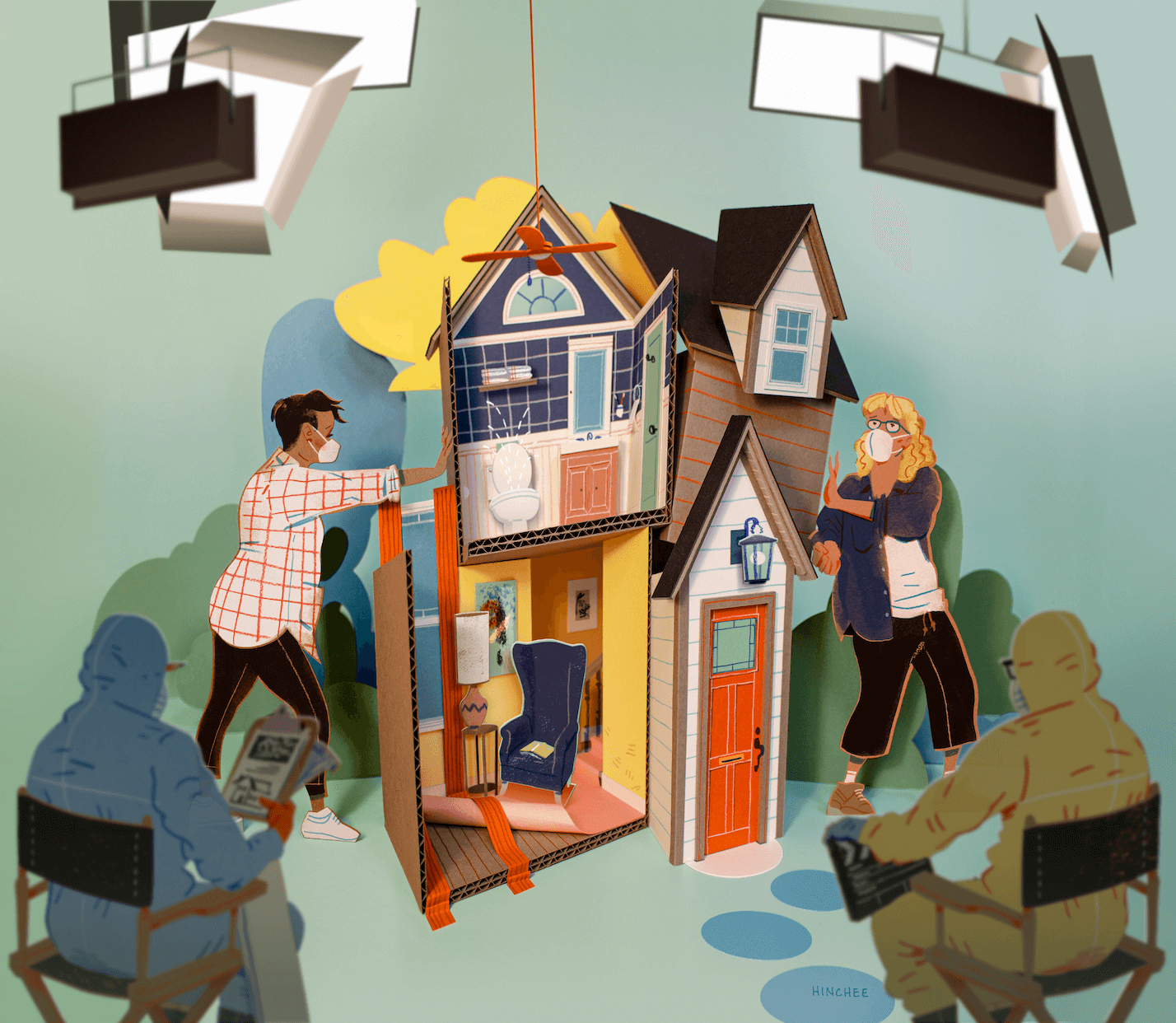 Our art departments produce miracles everyday... but should they have to?

With urgency in every step, Production Designer, Tom Conroy, sprints to the taxi and hops in. He’s en route to Hatton Gardens, London’s jewelry quarter, in desperate search of a ring needed for the afternoon’s shoot. Along the way, he drains his bank account and continues the journey with wads of cash weighing down his pockets - whatever it takes to ensure production isn’t halted. So, how did Tom end up in this predicament? Let’s rewind.

It’s a classic example of something film professionals know all too well - miscommunications around a script or schedule change that further complicate getting it implemented. Weeks prior, a rewrite to the script introduced a ring to the scene (we know what you’re thinking… wait, wouldn’t that be a costume piece #grayarea). Unfortunately, the change was not made explicit to the Art Department during distribution. The call sheet didn’t make any reference to it and all was going to plan until the producer asked Tom that morning, “Can I have a look at the ring?” [dramatic pause]. “What ring?” Tom responded, and a frantic search ensued. It’s no mystery the Art Department faces many impossible tasks throughout a production; the miscommunication of a script change being just one. With the help of numerous production designers and art directors, we set out to uncover the top three challenges they overcome every day.

Since when did getting approvals become “design by committee”?

It’s safe to say that nobody enjoys waiting in anticipation for information, especially when it stops progress in its tracks, but people cope because there’s usually no other option. Art Department professionals repeatedly experience this grueling albeit mandatory wait for creative approval of their designs. However, it wasn’t always this way. Supervising Art Director, Robert W. Joseph, describes a time when the process was pretty straightforward before it morphed into “design by committee” - many layers of management including the director, showrunners, writers, and more, often have to sign off on every detail. On a recent production, Robert had 25+ people needing to give their ‘ok,’ stifling any forward momentum. Adding to the complexity is the industry’s very specific approval hierarchy.

Because of the nature of the sensitivity of the process, you don’t always have a direct route to the people who make the decisions [...] typically we’re not allowed to jump the chain of command. - Andrew Li, Art Director

When answers are required to meet impending deadlines, a seemingly infinite list of approvers and no means to engage them can be frustrating at minimum. Then you add continued reliance on remote work to the mix - most of this process now takes place over Zoom - and it’s downright exhausting. It’s hard enough keeping people’s attention and demonstrating the intricacies of a design when they’re physically present, try doing it in 2D - you can’t point things out or draw on things in the same seamless way as you can in person. There’s got to be a better way!

Build us the Taj Mahal …by next week!

Well, can you just get it done? Can’t you find more people out of thin air and magically make 32 hours in a day? Although the sarcasm is flowing, this is not something Art Director, Cassidy Shipley, would be totally surprised to hear in today’s production environment. Expectations are higher than ever: the scale and the scope, notably for TV, have grown exponentially while schedules, prep and build time continue to get shorter.

Normally, it’s taken us 12 weeks to build a very elaborate set. Now, we’re expected to be able to do it in 8 weeks and still produce exactly the same level of high production value as we did before. - Andrew Li, Art Director

One explanation for this change is the continued advancement of technology. When Production Designer & Art Director, Alex Hajdu, began his career, the pace of collaboration was limited. It could only move as fast as catching someone on set or in the next production meeting. After email and text increased the speed of communication, expectations abruptly shifted and everything was perceived to be “too slow.” Art Director, Andrew Li, provided another explanation: the miracle workers of the Art Department produced one too many miracles. Studios and execs gradually concluded that it’s possible to reduce a timeline and deliver the same quality product, but underestimate the human toll this takes along the way. Longer hours and 6th, or even 7th, work days have become more normalized, posing heightened safety concerns as crews push through mental and physical exhaustion. It begs the question, how long until the love of the craft isn’t enough for people to keep going?

To survive, it’s every department for themselves - or is it? 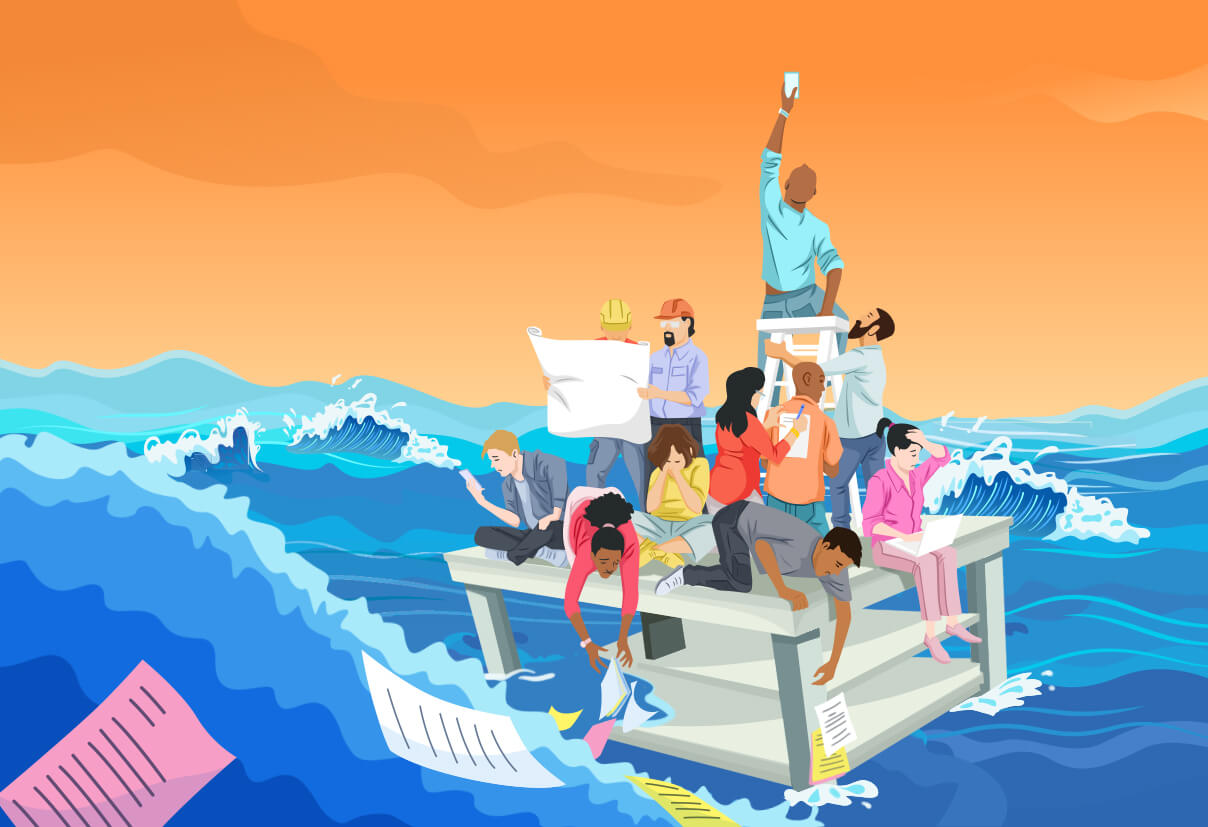 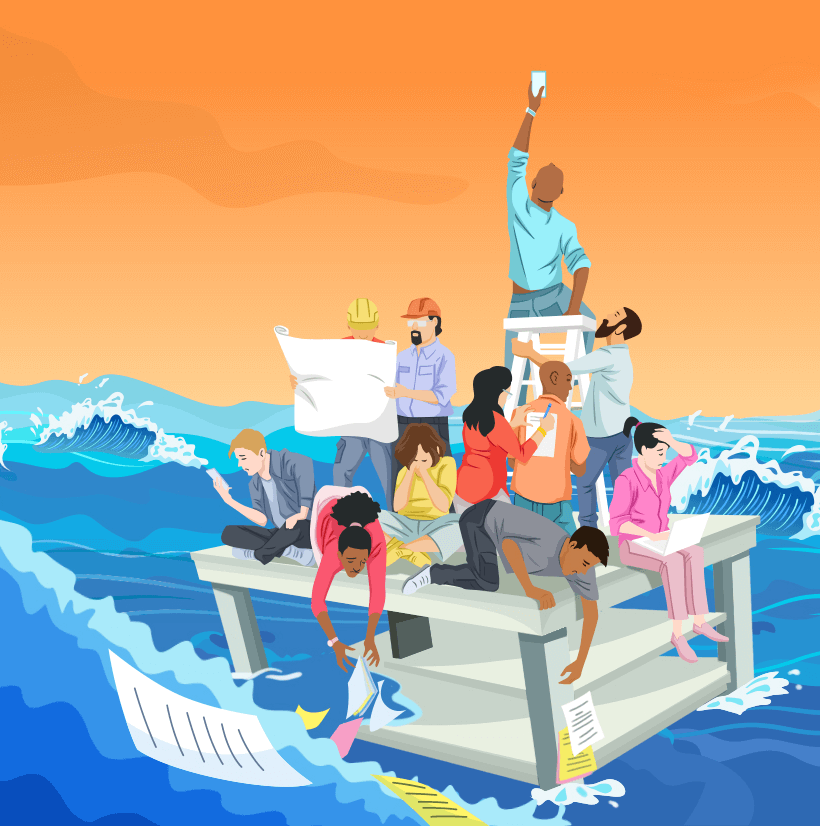 As expectations rise and schedules feel the squeeze, ALL departments face the same dilemma: how should they allocate their limited time to guarantee their own success, as well as that of the entire production? It becomes a puzzle that’s not easily managed. With hyperfocus on their own distinct priorities and deadlines, it’s all too easy to fall into isolation and overlook how changes in one department might affect another.

When [...] we’re all in our own, different silos, people are a bit detached from the overall workings of things. Everyone’s just dealing with their own shit because people are so busy. - Andrew Li, Art Director

Often, the onus to fuel collaborative conversation resides with the Art Department, typically considered the “Hub” of any production. Art Director, Cassidy Shipley, estimates that 75% of the time, he’s initiating the inter-department discussions required to keep all parties moving forward. His dream is to see this relationship grow to be more mutual - department heads consistently checking in with each other, sharing the latest versions of their designs and finding ways to work more proactively. It certainly sounds ideal. Departments usually have a myriad of reasons why a new piece of information can’t be made available production-wide: maybe they’re waiting for creative approval or the producer hasn’t green-lit the extra spend on the requested change. As Art Director, Andrew Li, pointed out, maybe the most critical piece to the puzzle is a universal understanding and appreciation of the complexities each department faces. Without empathy for every department’s plight, how can the production truly work from a united front?

What’s most clear after speaking with so many Production Pros is that there’s no silver bullet to easily resolve the top three challenges haunting Art Departments. Even so, a good first step toward improvement might be a concerted effort to talk openly about these issues at the start of prep, before available time becomes almost nonexistent. Afterall, time is a scarce commodity on every production and is directly impacted by the extent of these challenges. Or, do we concede that wasted time is the collateral of a process that can’t be improved and continue to rely on the magical powers of the Art Department to make miracles?

Thankfully, we believe it's not all doom and gloom here at ProductionPro. Our company is on a mission to reduce miscommunications and the resulting amount of time wasted. In fact, ProductionPro has already saved film crews over 9 million minutes (about 15,000 workdays) of searching for information from other departments.

So, what ever happened with Tom Conroy’s mad dash to buy a ring he never knew existed? He darted between multiple jewelry stores, found a ring that sufficed, and of course, got it to set in time for the shot. That’s what superheroes do. 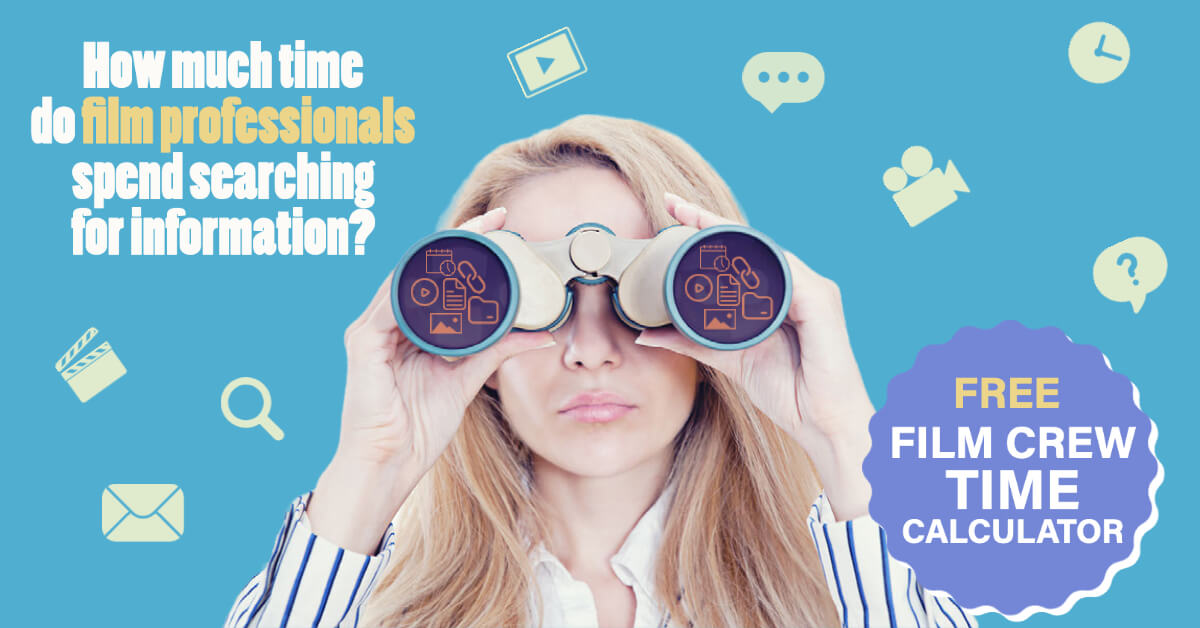 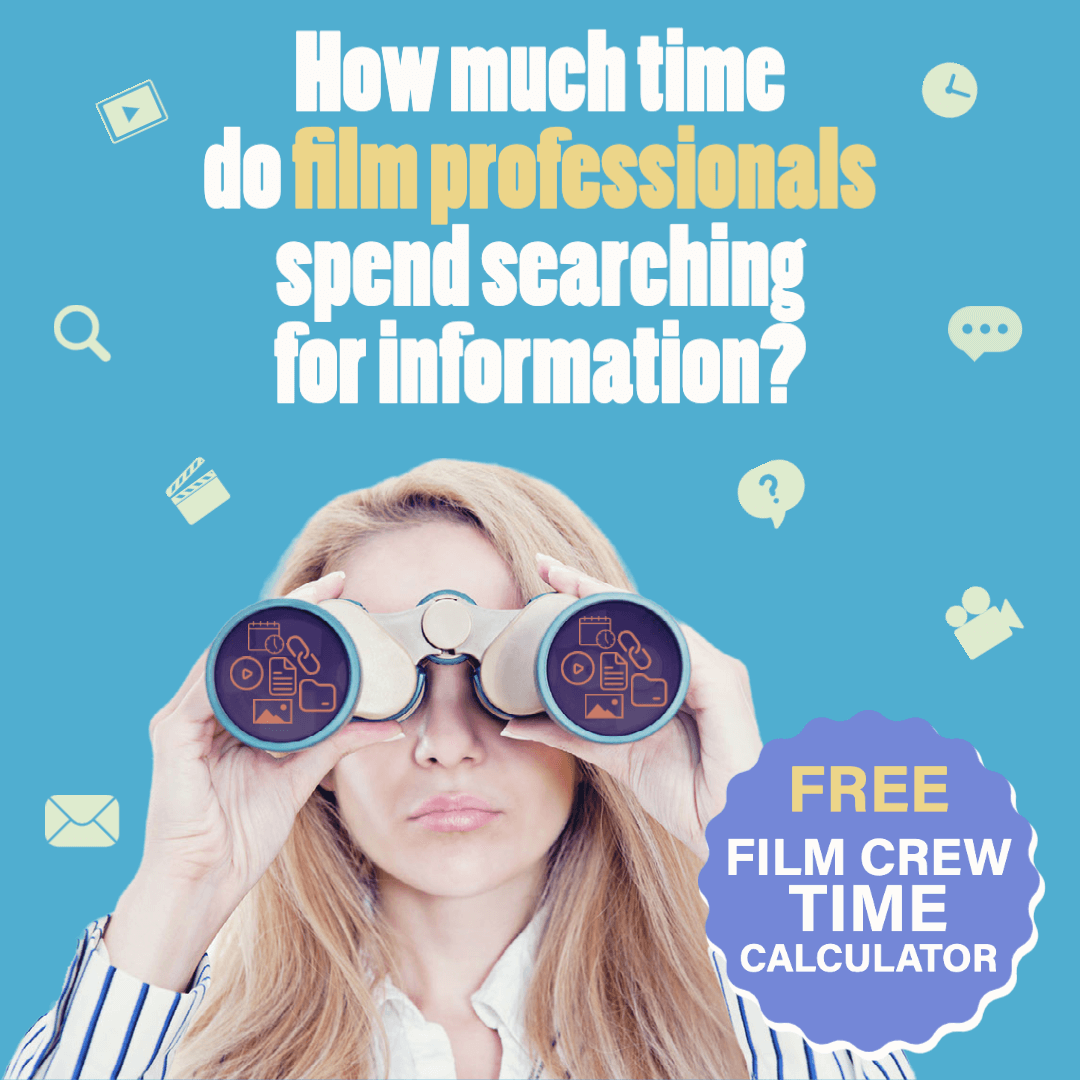 Have you ever wondered how much of your time gets wasted every day searching for current information from other departments? ProductionPro recently created a Film Crew Time Calculator to help you determine how much time you could be saving during prep and production.

Estimate the time you could save
Recent Posts

Connecting the dots between film departments